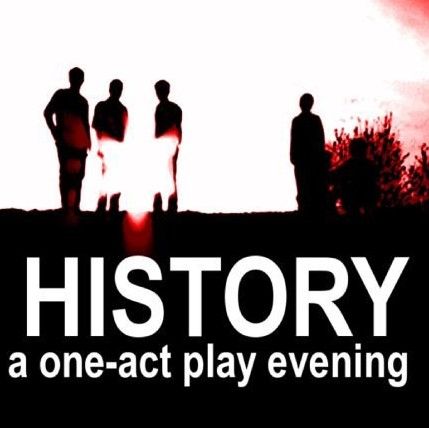 Making History, a collection of short one-act play, premiered on 17 May 2011 at the ONO in Bern.

The Caretakers’ debut production has successfully rocked the stage – and what a success it was! Three nights in a row, the ONO was sold out to the last seat and we want to take the opportunity to thank our audience for coming and watching, for cheering and applauding, for feeling, laughing and enjoying our plays – thank you so much!
And of course, we also want to thank our members for making this evening possible – without them, their creativity, without the actors and writers, the helpers and organizers and all the other busy bees, this evening could never have been the success it was.

“Making History” certainly has been a milestone in our society’s history, an evening filled with stories about airports and volcanic eruptions, about Elvis and newly found love, about TV shows and about how our surroundings force us to take the roles we don’t want, about a fateful birth and an equally fateful death – and we are glad that we had the chance to take this journey. But, brace yourselves, this will not have been our last journey, as we will, and this is a promise, continue to write The Caretakers’ history. So, stay tuned for our future projects!

Six plays, all based on the central topic “Making History”. Yet, those plays have never been on stage before. The members of the society preferred to take matters into their own hands and wrote the plays themselves. The result is a variety of stories that address familiar issues like love, life, death, and friendship in ways that one might not be expecting.

The Plays and Cast

Where the Hell Do You Think You’re Going?

written and directed by Julia Gwerder
Five people, one week in April, and a journey that just won’t stop: meet a business-man in a city that boasts of ozone, a student basking in the rainfall, a psychologist analysing herself more than anything else, a musician stroke lover stroke intern stroke stroke, and a wanna-be actress with nothing but music on her mind.
Jonathan: Fabian Claus / Cybil: Assunta Steiner / Eileen: Nathalie Dulio / Dominic: Thomas Lüthi / Sarah: Kathrin Probst

Based on a short story by Roald Dahl,
adapted by Tom Messerli, directed by Nathalie Dulio
A hospital room, an apprehensive doctor, a nosy midwife, an agitated mother and an inebriated father are concerned about the life of a newborn child. Will this child survive?
Doctor: Fabialn Claus / Clara: Katia Grütter / Alois: Richard McKinley / Midwife: Beatrix Castellote-Iselin

written and directed by Kathrin Reist and Alexander Sigrist
“History Uncovered”, a new and, hopefully, ground-breaking TV show has an ambitious goal: To uncover history through the eyes who have actually lived through history. Everything is ready – the presenter, the cutters, the cameras, the audience. But no one expected the first guest they would get: Kurt Brown, the ultimate everyman, who has got more to tell than you’d ever want to hear.
Presenter: Richard McKinley / Kurt Brown: Tom Lütscher / Guy 1: Alexander P. Sigrist / Guy 2: Eva Grädel / Cable Girl: Kathrin Reist

by Franz Andres Morrissey, directed by Alexander Sigrist
One room. A prisoner. A prefect. The people outside are calling for a sedition charge. The prefect is ready to let the prisoner go. But the prisoner remains silent. The question is: Who exactly is this prisoner? And how will his uprising against the establishment end?
Prisoner: Yannick Walthert / Prefect: Thomas Lüthi