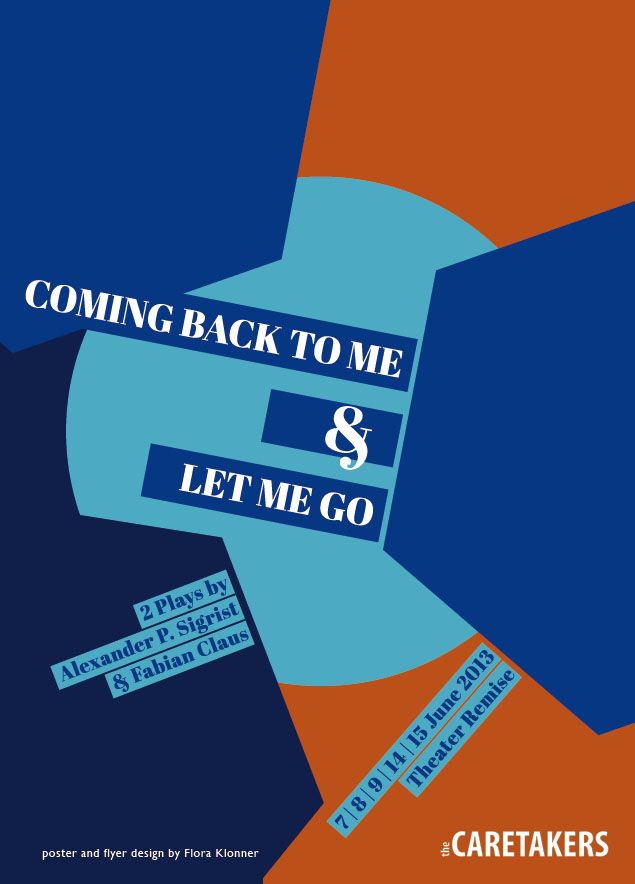 Scroll down for another video and more photos!

Coming Back to Me / Let Me Go premiered on 7 June 2013 at the Theater Remise in Bern.

Coming Back to Me

It all begins on a beautiful evening in the year of 1984, as four friends, Paul, Face, Leigh and Mill go to a bar to celebrate something they have achieved. Naturally, they get drunk, they sing, they live the friendships that connect them. But soon, the cracks start to show. What are their roles, their identities, how do they define their relationships? And where will they go after this evening, will they stay friends and, if yes, for how long? The answers to this are found only twenty years later as the friends meet again in the same bar to face each other one more time.

One room, three different points in time. Coming back to me is a play in three parts, a play not only about friendship and love, but about the sense and senselessness of each and all our lives, asking the all important questions:

Can we ever let go of our past?
And who the heck is that barkeeper?

A young and lonely man called Hope coming home with a bottle of wine and some pills. Two stray lovers meeting each other for the first time, trying to see beyond each other’s shallowness. Two couples locking the world out and having a quiet evening in – bad thing is, they are missing one husband. A wedding that should have united the whole world, until everything goes all wrong. And a news team bringing the unadulterated story of what’s happening to a television near you. This is the story of Hope, Maya, Rob, Jack, Liz, Tammy, Riley, Sue and Richard, a story about how their lives do and do not intertwine and about how a single and senseless moment will change everything.

Three rooms, one moment in time. A story encompassing the world we all thought we figured out. Let me go is a play in many parts, that fall apart, only to reconnect again, to reach for the soul and to force the following question onto us: Why did we only start caring when everything already was far too late

Some photos from the performance

Some photos from rehearsals